Complex decision-making of the agents in Domino: 4DTA

The concept of the 4D trajectory considers time to be the fourth dimension of trajectory, integrated with the three spatial dimensions. Therefore, 4D trajectory adjustment (4DTA) allows for not only the adjustments of the aircraft level or horizontal position, but also the time it will take to execute some trajectory. Such adjustments can be performed through e.g. changing an aircraft speed with the intention of meeting the planned arrival time.

Due to shared resources that inherently exist in an ATM network (aircraft, crew, passengers, etc.), operational distortions suffered by one flight have the power to affect other flights by propagating through the network in a “domino” like effect (hence the project name!). Consequently, such propagation can bring network to a less than optimal or undesired state. For this reason, in Domino we explored 4D trajectory adjustment as one of the three approaches for protecting the network from such effects.

Which advanced 4DTA mechanisms are used in Domino?

Two different 4DTA mechanisms were implemented and studied in Domino. The first one, dynamic cost indexing (DCI), enables a flight to adjust its cruise speed to amortise the expected delay (partially or fully), and thus protects scheduled arrival times. The second is wait for passengers (WFP) that aims at protecting passenger itineraries by waiting for delayed connecting passengers.

These two mechanisms were considered at the network level and implemented on three levels of varying complexity: the baseline level aims at imitating current practices (as described by several aviation experts upon consultation), while the two other levels employ more complex techniques based on the optimisation of certain objective functions.

At the baseline level, the cost index (CI, the ratio between time-related costs and fuel costs) is adjusted before take-off and fixed throughout the flight. Wait for passengers is done seldom and selectively, considering it only in the case of premium passengers (e.g. higher class passengers or passengers who have a status with the airline), and only when waiting for them wouldn’t delay the pushback for more than 15 minutes.

The two advanced levels involve more intelligent and data-driven decision making, based on cost functions calculated for each flight at the precise moment of decision-making. At level 1, a flight reassesses its speed at the top of the climb by comparing expected fuel cost (assuming it continues flying at the current speed) and time cost (that takes into account passenger, crew and maintenance related delay-caused costs, among others); and chooses the least costly option. Wait for passengers decision making process is also cost-based, comparing the cost of waiting for a passenger vs. the cost of not waiting for them and having to take care of them (compensation, re-scheduling, etc.).

At level 2, the decision making is still cost-based with the objective of minimising the overall cost; however, this time the DCI and WFP assessment are coupled via a unified cost function and the optimal decision is made before take-off. Additionally, the re-assessment is done at the top of the climb, with the added possibility of slowing down if the expected arrival time is very large, so to avoid potential holding times and save fuel.

How did 4DTA mechanisms affect the air traffic network?

In order to decide whether to modify speed or departure time, flights need to estimate expected delays, as well as fuel and delay costs. Image 1 illustrates how their behaviour varies across the three implementation levels, and two delay levels expected in the system (baseline with the delay levels as expected in the network and the stressed one with much higher delays than usual). We observed that level 0 leads to ‘greedy’ behaviour, with flights intending to recover as much expected delay as possible (on average more than 80% of expected delay).

On the other hand, when the cost of delay and fuel are explicitly considered, we can observe a more conservative approach at level 1. That is due to the fact that, in the case of many flights, speeding up will generate very limited (time-related) savings, but at the expense of much higher fuel cost. The total cost at level 1 is reduced when compared to level 2, as flights have been choosing to reduce very expensive missed connections and speed up only when economically beneficial for the airline.

Level 2 uncovers a very interesting behaviour, more prominent in the case of a stressed system with higher delay levels than nominal, in which delay recovery becomes a priority due to highly increased delay costs. Comparing it with the system in the baseline state, we can observe a noticeable difference in the percentage of the expected delay that flights decide to recover (see Image1); with a great number of flights considering the possibility of slowing down at the top of the climb (i.e. generating delay) in order to save fuel! Remember that this level implements the coupling of the WFP and DCI cost functions. However, by disaggregating the results we noticed a significant number of flights that decided to wait for passengers and then recover the delay, but slowed down later at TOC once they had a more up-to-date information on the expected arrival delay. As at level 1, the total costs are also reduced at level 2, as seen on Image 2. 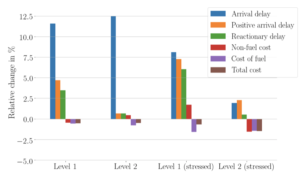 While these mechanisms provide especially beneficial solutions for the airlines and their cost management, especially in the case of high delay levels in the network, we noticed they don’t necessarily have a positive impact on the passenger experience. Many passengers in the model experienced an increase of the delay when more advanced mechanisms were employed, especially passengers who didn’t have any connecting flights in their itineraries as the WFP primarily takes care of connecting passengers. Such trade-off between passenger-centred and flight-centred metrics might be inevitable and it should be a topic of further debates when implementing decision-support systems such as this one.

This was only a very short overview of the insights that the Domino team obtained by simulating a fairly large number of different scenarios. If you are interested in the whole story, including getting acquainted with how the other two Domino mechanisms – Flight arrival coordination and Flight prioritisation – affect the system, check out our publicly available report D5.2 Investigative case studies results.