Jet-bridges: The gateway to time-wasting?

So you walked for what seems like miles to get to your gate. You’ve just queued for an age to have your boarding-card scanned and your passport checked. “Bon voyage” says the attendant. Welcome to the jet bridge, or Passenger Boarding Bridge (PBB) in the jargon. A claustrophobic metal box, often not air-conditioned, where you can now stand in another queue, at the front of which a business-class passenger is slowly trying to place too much luggage into the overhead bin while simultaneously talking into a telephone, apparently oblivious to the world behind. When you land, you’ll have another interminable walk from your gate to passport-control/luggage-reclaim/exit.

And ever was it so, and ever will it be so.

But why is it like that? This walking and queuing is a constraint on mobility and on the EU goal of having 90% of intra-EU32 air passengers undertaking their journey in less than four hour, door-to-door. There must be something we can do to reduce this.

Why do we walk so far in airports?

In the early days of civil aviation, passengers were led on foot from the terminal to the plane and climbed a mobile staircase to board it; the reverse process applied upon landing. This is still the case in some smaller airports. As the number of flights increased, it became difficult to park planes close to the terminal, thus the walk (sometimes in the rain!) lengthened and more staff were needed to marshal the passengers. From the early 1960s, airports started installing piers and PBBs that made marshalling easy and kept passengers dry. With the development of the hub, PBBs helped passengers transfer between flights within a short time.

But PBBs meant that the gates at an airport have to be spaced far-enough apart to allow aircraft to park at them safely; at least an aircraft wingspan between them therefore. (Some airports reduce the distance a bit by curving the piers of having circular satellites – Paris CDG Terminal 2F and CDG Terminal 1 are examples of this).

Aircraft wingspans can range from some 25m for regional jets like the E170 and CRJ and around 35m for B737s and A320s, to more than 65m for B777s and B747s and even nearly 80m for A380s. The spacing, or combination of spacings, used at a given airport depends on that airport’s traffic but it is fair to consider an average 40m walk or travellator from one gate to the next. With a gate either side of the pier we have an average of 20m walk per gate – plus any additional walk (usually a shopping mall) from security/border-control/etc. to the first gate.

Why so much queuing?

160 passengers or so have to wait at the gate while an A320 is prepared to accommodate them and they can board, generally through just one PBB attached to the front door. In order to improve the time it take to actually seat passengers on the plane, airlines often request people to pass through the gate as a function of the “zone”, or group of rows, of the aircraft they’re seated in – generally starting from the rows at the back. However, it is impossible to impose such a sequence and additionally, business class passengers (seated at the front) are generally advised that they can “board at [their] convenience” thereby blocking other passengers while they stow their cabin luggage. If passengers boarded in the correct sequence boarding time could be massively reduced.

So why not scrap the jet bridge?

Scrapping the jet bridge could be a solution to both these problems and enable a real reduction in time wasted. Isn’t it time we re-thought about buses?

Buses are already a feature of airports.

Now if you ask anyone about buses or mobile lounges at an airport they will cringe! But given that they are uncomfortable – most passengers have to stand in them – that there’s no distinction between business and economy classes, and that airport policy seems to be to cram as many passengers as possible into one of them before it moves off, that dislike is understandable. The reason for this overcrowding is mostly economic – why employ 3 drivers when you can squeeze all of the passengers into 2 buses. With the advent of automated transport, this argument is removed.

If aircraft parked at stands by runways, less taxiing would be needed than for getting back to a terminal (especially from the new runways at Frankfurt or Schiphol, for example) and there would be no need for taxiing aircraft to cross runways, which brings a risk of runway incursion accident. Buses use much less fuel to carry the same number of passengers (and they could be electric) and they can use simple tunnels to cross runways.

If bus loading concourses were designed like a train station under the pier with several buses per flight lined up perpendicular to the pier, the entire width of bus-train, pavement and escalator would be some 5-6 metres per A320. 30 gates would therefore require 180m as opposed to the 600m required today.

Using multiple buses allows embarkation and disembarkation from both the front and rear doors. This can therefore speed up these processes, provided the departing passengers have been assigned to buses according to their seat zone on the plane (rarely the case today). Access to each bus of a bus-train could be controlled by automatic gates opened by scanning a boarding card, thus ensuring correct zoning of the passengers; the business-class bus could be more comfortable than the economy-class ones. Additionally, the buses could be available well before the plane was ready for boarding, taking the place of waiting areas – no pier seating required – and enable the gate process to be executed smoothly at the passenger’s convenience and finished on time. Additional seating could be placed on an upper floor in the shopping area. 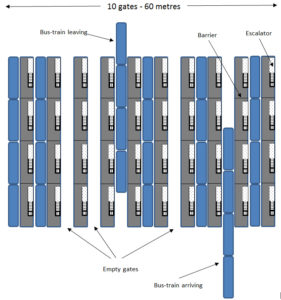 Once the bus-train has arrived at the aircraft, doors can be opened in sequence to allow passengers to board smoothly. As with the mobile lounges at Dulles, buses can take passengers directly to where they need to be – the central immigration/transfer/luggage-reclaim area – rather than their having to walk down long piers.