Airlines’ objectives for the operations of their flights, as defined in their flight policies, are translated into operational Cost Indexes (CIs). The Cost Index represents the ratio between cost of time and cost of fuel, hence a CI of zero in the Flight Management System will operate the flight minimising the fuel usage, and setting the CI to the maximum possible value will operate the aircraft minimising the time required for the route. Therefore, modifying the Cost Index allows crew to explore trade-offs between fuel and delay.

However, with this approach, CI quickly becomes a proxy to manage the flight in order to meet airline’s objectives (which go beyond fuel and delay).

So, What do airlines want to ultimately manage?

After the Advisory Board meeting held in London, it was clear that airlines monitor many different indicators that should be considered during their operations: fuel cost, passenger missed connections, reactionary delay, etc., but after further analysis it was agreed that the relevant objectives can be reduced to only two:

Therefore, from an optimisation point of view, two objectives (cost and OTP) should be considered.

But, How do I estimate the cost?

This is one of the hard parts of the estimation of the impact of different alternative trajectories: How to accurately estimate the expected cost (fuel and cost of the delay) incurred by flights?

Cost of fuel is simple based on expected fuel usage, but for the cost of delay, a hierarchical view will be developed. 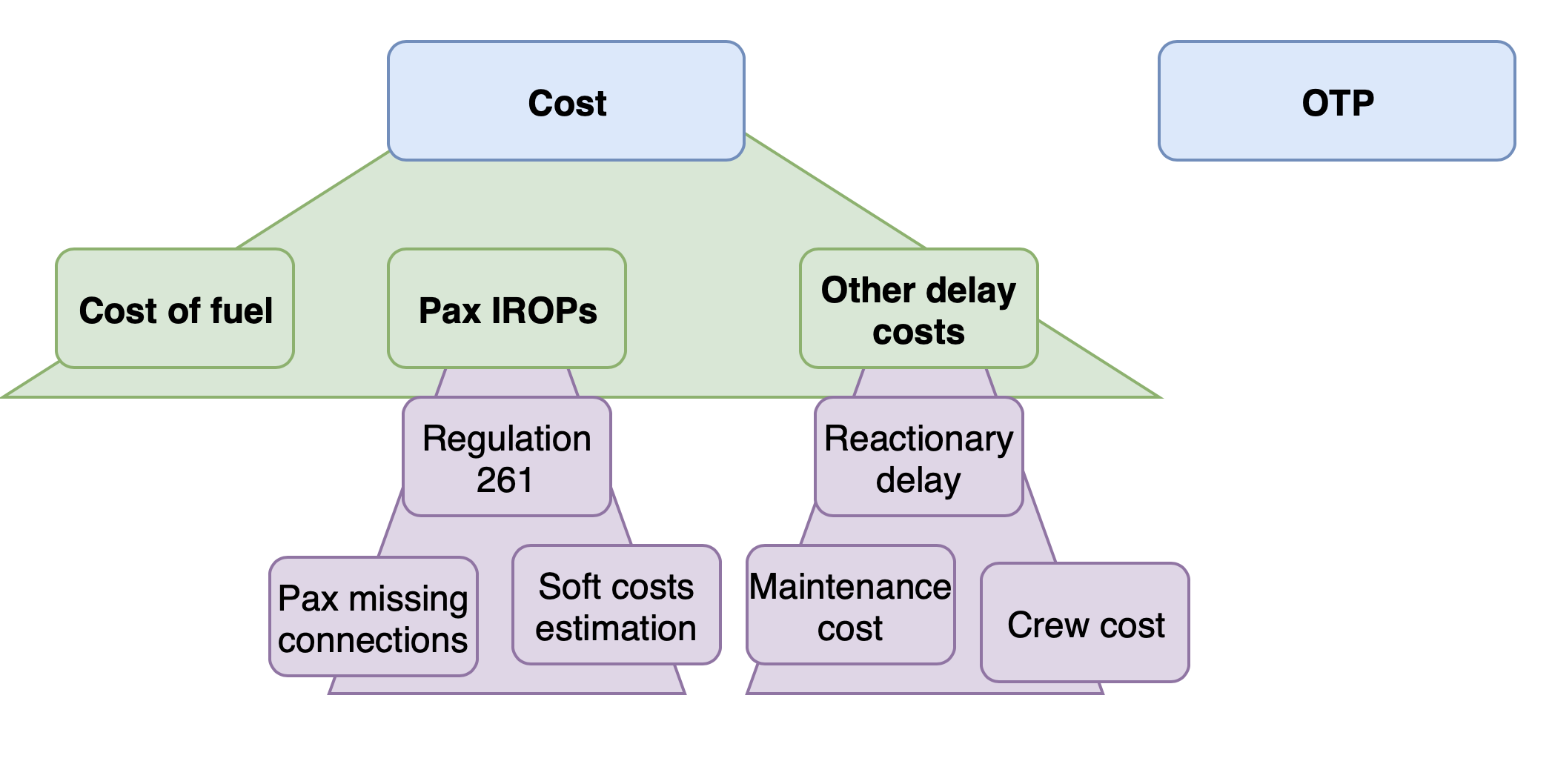 At the highest level, cost can be divided into cost of fuel, cost of IROPs and other costs. Then these costs can be further disaggregated into individual costs components, which might require low-level indicators to be estimated (e.g., number of passengers claiming compensation due to Regulation 261, or minutes of reactionary delay).  This estimation of low-level indicators is the objective of the Performance Indicator Estimator in Pilot3 (see our previous blog here) for more information.

Then, Which trade-offs can be considered?

Airlines (and crew) should try to minimise their total cost when modifying their trajectory (e.g., speeding up), but in some cases a trade-off between reaching OTP and incurring in a higher expected total cost (e.g., due to higher fuel consumption), or having an overall expected lower cost but not achieving OTP (e.g., not speeding up, being a bit late but saving fuel) could arise. Pilot3 will try to compute this information to present these alternatives to the pilot.

The figure below shows an example of cost as a function of the arrival delay. If the flight tries to reach OTP, the cost is high as a significant amount of fuel is required. The minimum cost is obtained with some delay at arrival, even if OTP is not achieved. Note how these cost functions could present discontinuities as for example, high increment in cost can arise if a group of passengers miss their connection if the arrival delay is higher than some specific values. 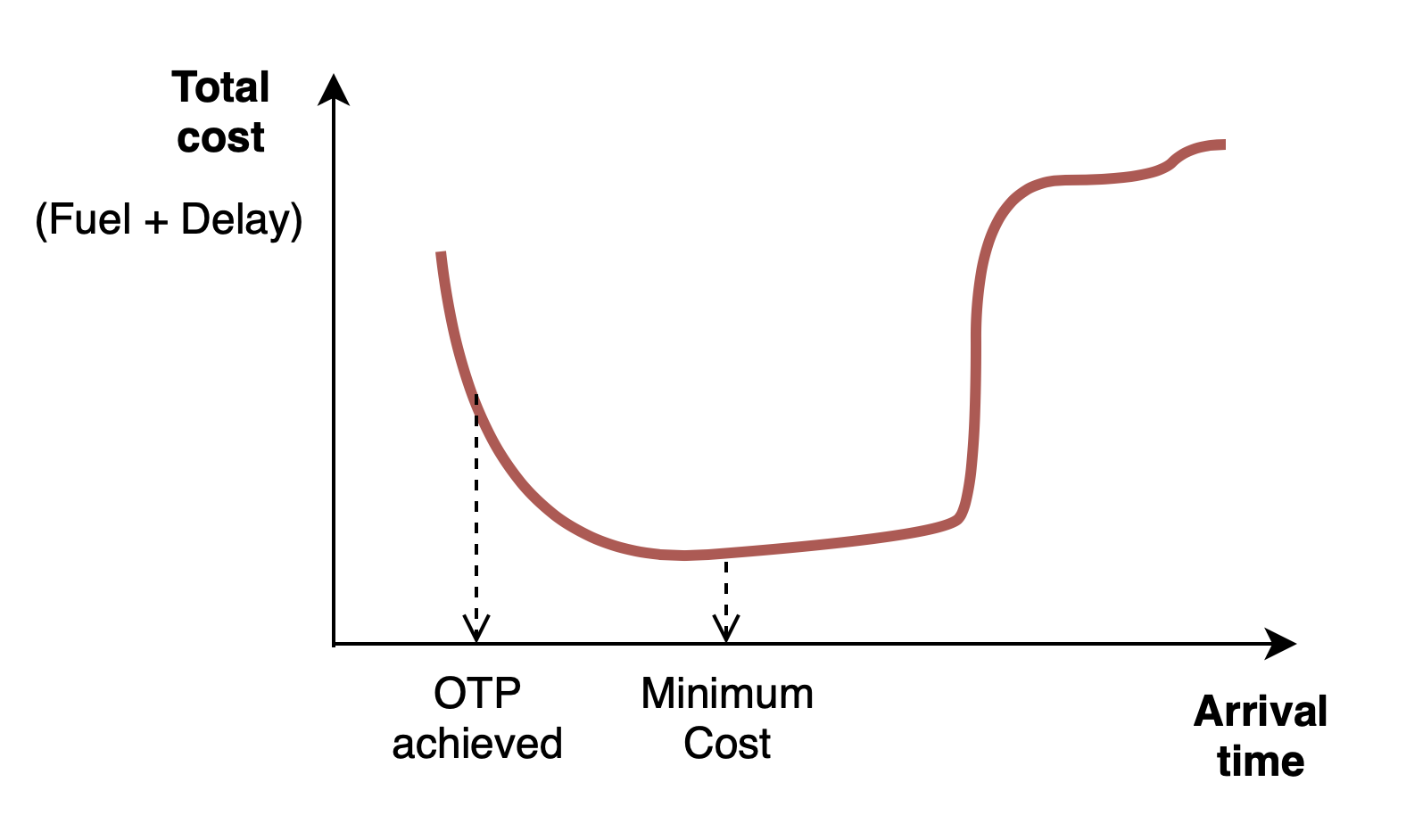 Finally, in some instances the sub-cost components could present trade-offs between them, with a statistically equivalent total cost. For example, having a higher fuel cost but a lower IROPs cost.

These trade-offs require Pilot3 to consider a multi-objective optimisation framework. More details on this will be presented in a follow-up blog entry!

A note on uncertainty

Finally, the second difficult part of estimating the performance of different trajectories alternatives is the consideration of uncertainty (e.g., will my flight get stuck at a holding at arrival? How long is my taxi-in going to be? What is the weather ahead?). All these uncertainties should be considered in the model and a dedicated module has been added in Pilot3 architecture. This will be further explained in a dedicated new blog in the future.

Pilot3 considers that airlines seek to minimise their expected cost (apart from the OTP objective). As a consequence, Pilot3 will focus on the optimisation of the expected objective function, providing solutions which would produce the best outcome in average: the optimiser will be risk-neutral.