Pilot3 could be triggered at some point of the departure procedure or when the aircraft is already en-route. The system will optimise the aircraft trajectory from the current aircraft state (i.e., the moment Pilot3 is triggered) down to reaching FL100 at the proximity of the destination. After consultation with the Advisory Board, it is understood and assumed that from that altitude to the runway, the actions of the pilot are limited and standardised. Therefore, the trajectory plan will be computed assuming standard operations for this final segment (from FL100 to the runway) of the flight (i.e., a fixed sequence of aircraft intents) but dynamically estimating how long these procedure would be. 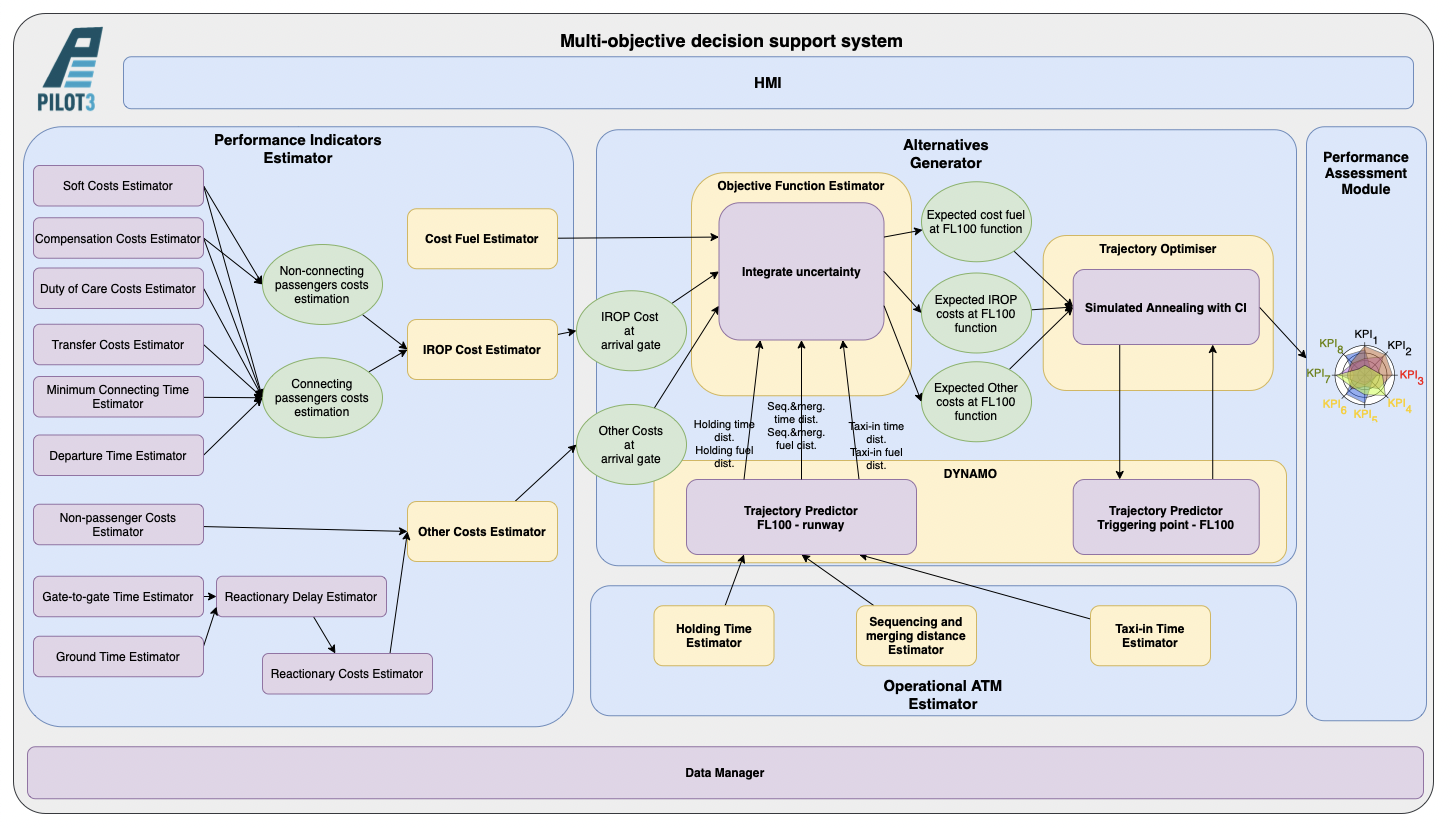 Figure 1. High-level block diagram of Pilot3 architecture modules and functional relationship between them.

Among several different components of Pilot3 (see Figure above), the alternatives generator is in charge of the optimisation of the trajectory from the triggering point to FL100. It is composed of different elements:

The cost function can be seen as a step-wise function, as increments are produced linked to events, e.g. passenger missing connections, reaching the curfew for having to compensate passengers due to Regulation 261, or breaching a curfew at the end of the day due to reactionary delay. However, most of these parameters have some degree of uncertainty (e.g.  if passengers will miss their connection does not only depend on the arrival time of the flight but also on the actual time taken by passengers to do the connection at the airport and on the status of the remaining flights in the fleet). The expected cost function considering all these internal uncertainties is computed by the performance indicator estimator with respect to the arrival time at the gate and is represented in Figure 2. 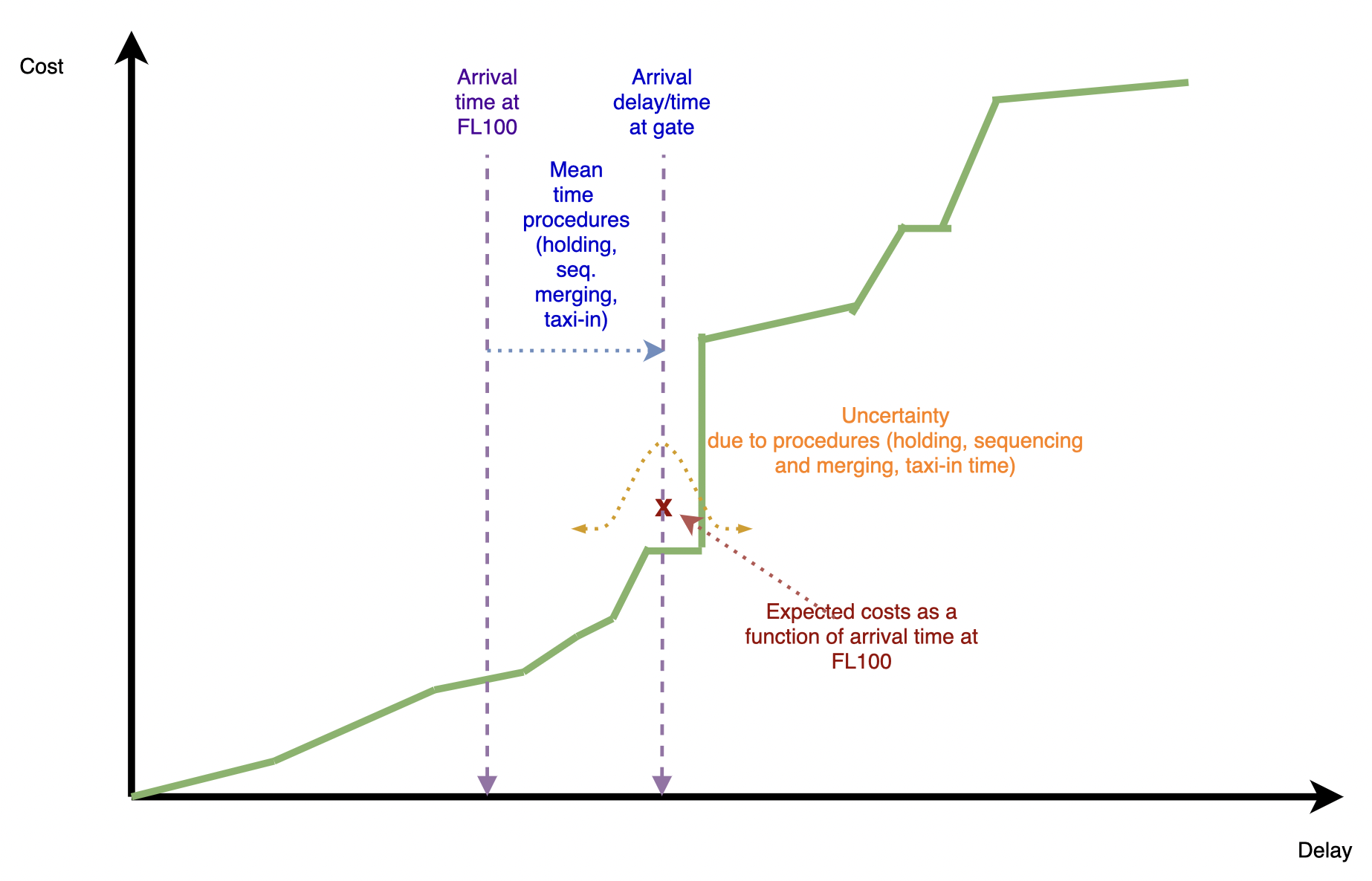 Figure 2. Propagation of uncertainty as a function of the arrival time in the total cost function.

As shown in Figure 2, given an arrival time to FL100, the actual time of arrival at the gate will be in average that time plus the expected time at holding, the expected time of sequencing and merging and the expected taxi-in time. If all the distributions are considered, their stochastic processes will be added, i.e., convolved. Then as presented in Figure 3, the expected cost can be computed as a function of the arrival time at FL100. This cost functions now integrates the uncertainty on the time required to reach from FL100 to the gate. 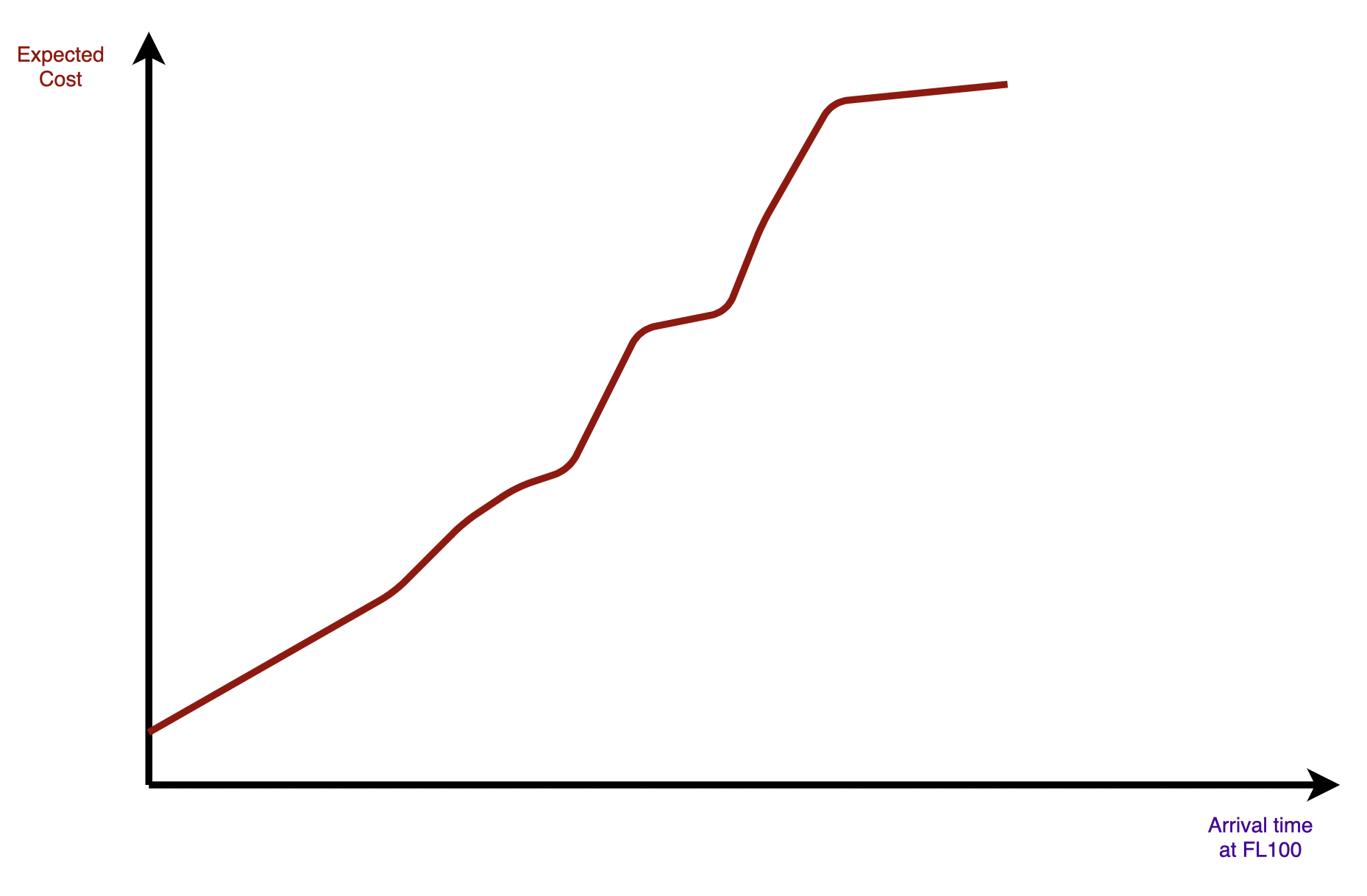 Figure 3. Total expected cost (considering all the uncertainty components) as a function of the arrival time at FL100.

Finally, the trajectory optimisation module aims to find the best vertical flight profile between the trigger point of Pilot3 and FL100 by selecting the optimal cost index. Note that, because the trajectory predictor is used internally to produce flyable phases of cruise and descent, the produced trajectory is deterministic (all the uncertainties are modelled from FL100 onwards). 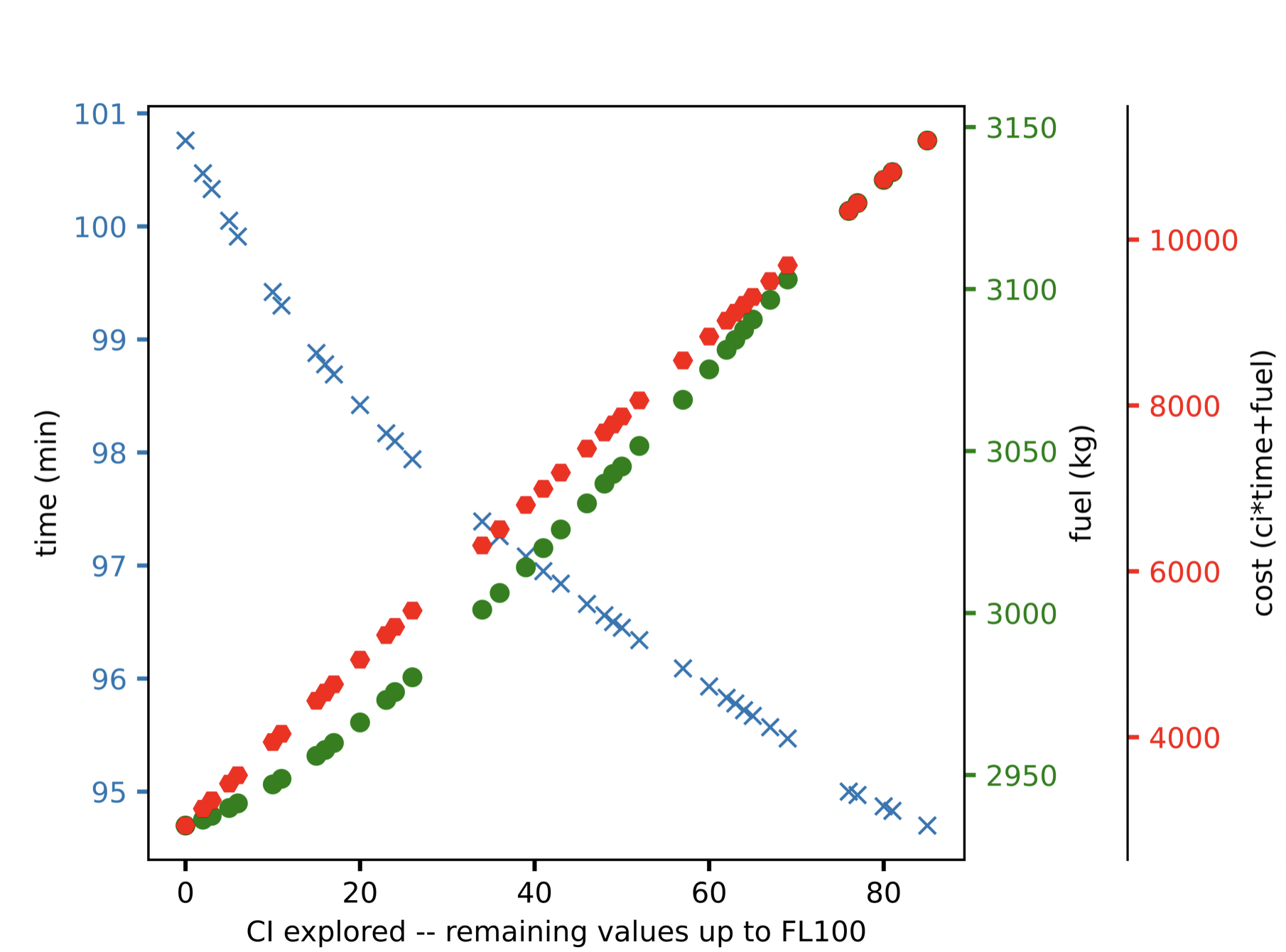 Figure 4. Resulting fuel mass (green dots) and flight time (blue crosses) returned by DYNAMO, as a function of the value of CI. The total cost according to a DOC function is also represented (red dots). 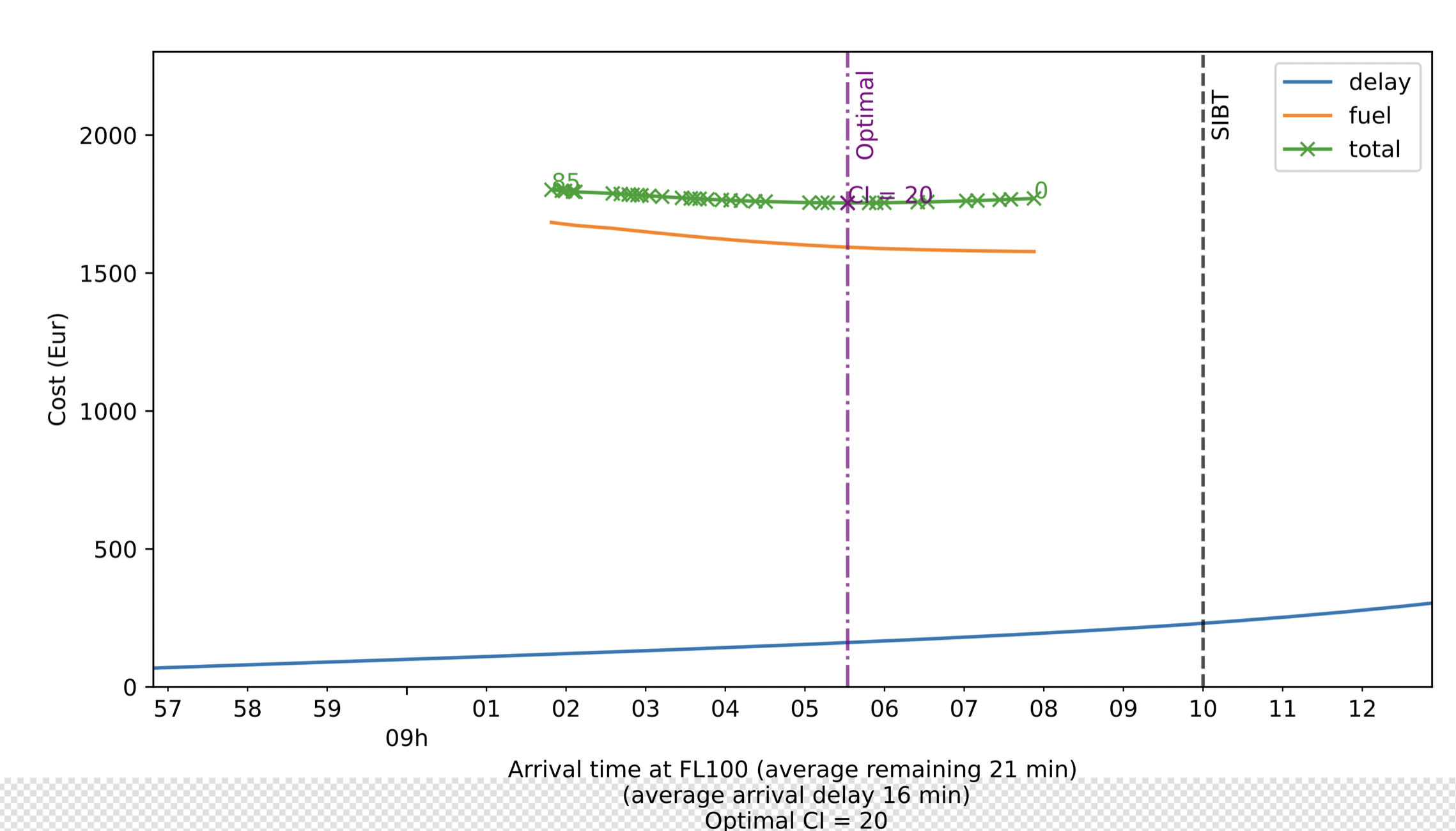 In the current implementation of Pilot3, the optimisation framework only provides with a single alternative (trajectory) based on an optimal cost index. In future development, instead of using the cost index as a proxy to optimise the vertical profile, the altitude and speed will be optimised directly considering the cost function provided by the objective function generator increasing the space of search beyond the reachable just modifying the cost index.