The question of ground access to airports is the object of many studies. How do we get people to the airport quickly, efficiently and sustainably? A previous blog post touched on the many different means people use to accomplish this part of their journey.

One of the major options that is often pursued is the creation of a train line joining the airport to its host city. However, while this city is often the most frequent origin/destination of travellers using the airport, it by no means accounts for the majority of surface access/egress journeys.

For example, fewer than 54% of access/egress journeys to/from London Heathrow (LHR) come from the whole of Greater London, much less from the central part London that is served by the Underground and the Heathrow Express train. In fact, the Express trains between them only account for 13% of terminating passengers which, while certainly not negligible, leaves seven out of every eight passengers to take a different mode of transport. 61% of passengers to LHR use private transport. After all: who want’s to join all of the congestion travelling into the centre of a big city from the suburbs (or beyond) where they live, just to get the train out to the airport?

So what’s the solution? Heathrow Airport Ltd (HAL) is pursuing a plan as part of its “Heathrow 2.0” initiative to ensure that the 100 largest cities in the UK are linked to LHR by train with no more than one connection. More rail access will be available when the “Crossrail” line that will run between Brentwood and Reading through London has been completed.

We can also make it easier to park, reducing time to do so and the walking time needed to catch the shuttle to the airport. Stanley Robotics, a French startup, is proposing a robotic valet that will pick your car up at the entrance to the car park and park it for you, fetching it for you when you return.

Airports like LHR are moving to the “toast-rack” layout. With the creation of Terminal 5 (T5), satellite terminals (5B and 5C) are placed between, and perpendicular to the runways, fed from the main terminal (5A) at the end. An air-side underground train takes passengers from the check-in and security in 5A to the satellites. 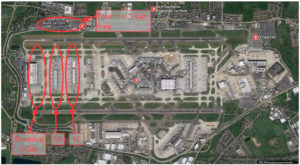 The new “Queen’s Terminal” will eventually have the same design.

But when T5 was built both the Underground Piccadilly line and the Heathrow Express were extended – parallel to the air-side underground train serving the satellites – to bring passengers land-side to 5A. Move them west to move them back east – not very efficient!

Why not move the terminal, instead of the people?

Isn’t it time we started re-thinking how we design our airports? Is there any reason why the terminal needs to be where the runways are? Previously, it has been possible to check your bags in at a railway terminal before boarding your train/bus to the airport (at London Victoria for Gatwick, for example) but this is not really moving the terminal to the people. 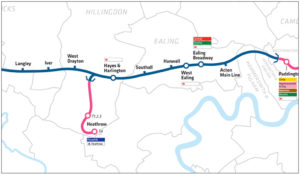 With Crossrail, a new underground branch line is being built from the London-Reading line (access from London only) to LHR, bringing more land-side passengers (but only some of them – many will still come by car) – but inconveniently not serving T5. Now if Terminal 5 check-in, baggage claim, security, etc. had been constructed on the London-Reading line, the same investment could have paid for an air-side line that would link in with the T5 air-side line and carry every passenger to 5A, 5B, 5C and beyond.

Imagine a terminal only a few kilometres from the runways, where the train line and the motorway access already exists. For LHR, this could have been at Iver, in an area served directly by the existing train line (and the same two motorways as LHR is) but with enough room for all of the airport’s needs with space for a complete airport business, hotel and shopping city without anything being bounded by runways, taxiways, gates, service areas etc. The car parks could have been right next to the terminal instead of, as is the case with T5, being so far away that the airport has had to spend £30m to provide personal transport “Pods” to transfer people to and from the terminal. 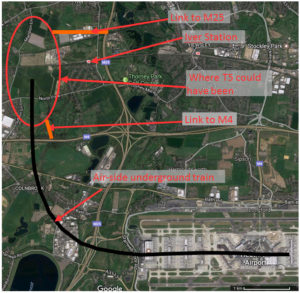 This air-side line could even be extended to a second or third terminal, closer to other access points to the city. In the case of a multi-airport city like London, one could even envisage an air-side railway linking all of the air-sides (Gatwick, Heathrow, Luton and Stansted), and their displaced terminals, enabling passengers to use the terminal nearest to them and to fly from the runway of their airline’s choice.

For Heathrow, it’s too late to think of implementing such a system now; the investment in Heathrow Express, the Crossrail link, T5, the Queen’s Terminal, the Pods, etc. has already been made.

But when the next new airport is built, perhaps it would be worthwhile to think that, instead of annoying both travellers and residents by building terminals and runways together, it would be much better to put the terminals close to the people and the runways far away from them.